'Jewel in the Crown' of Central Europe 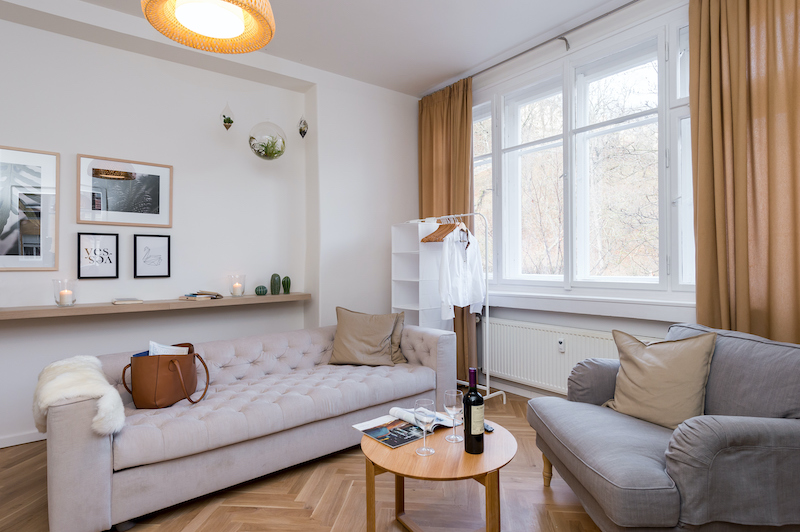 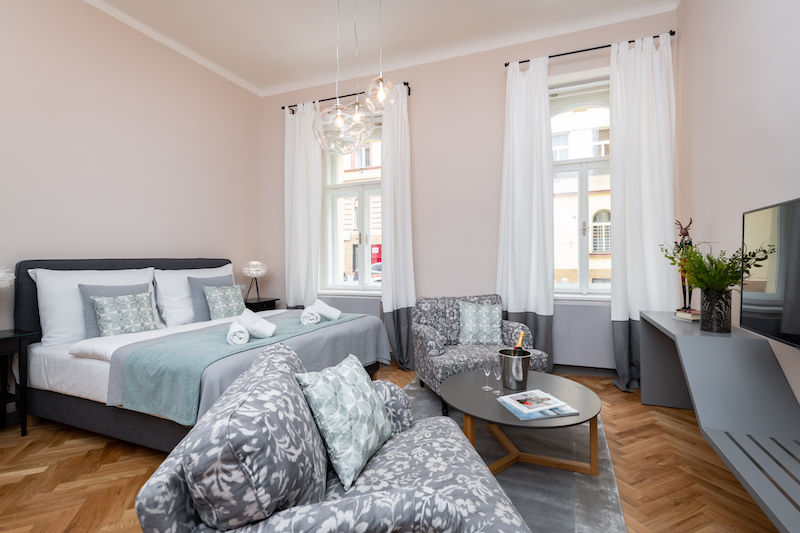 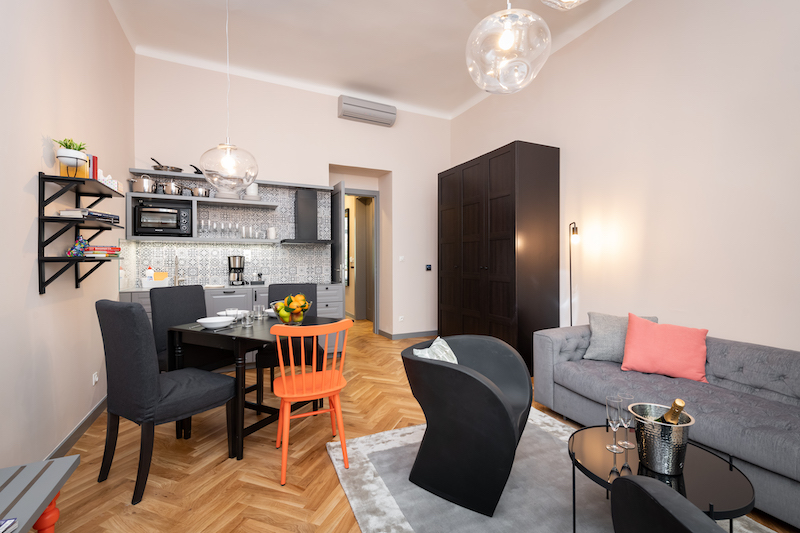 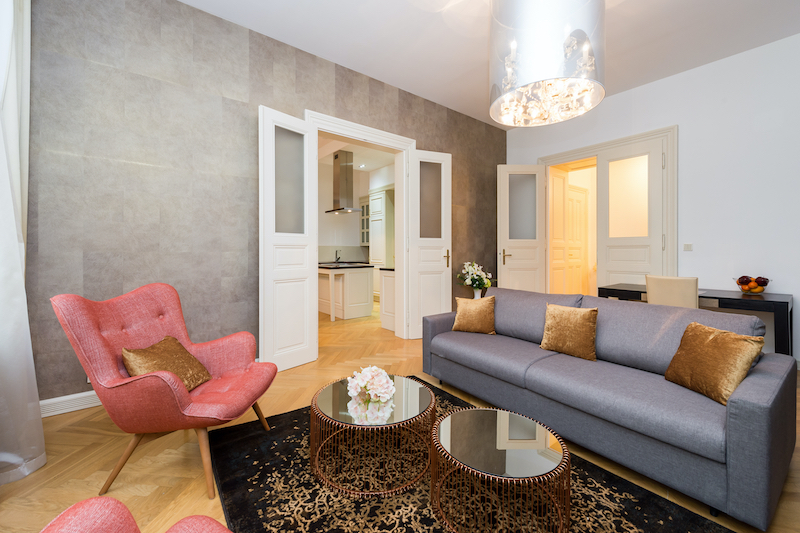 1 BR LUXURIOUS FLAT
IN THE HEART OF PRAGUE 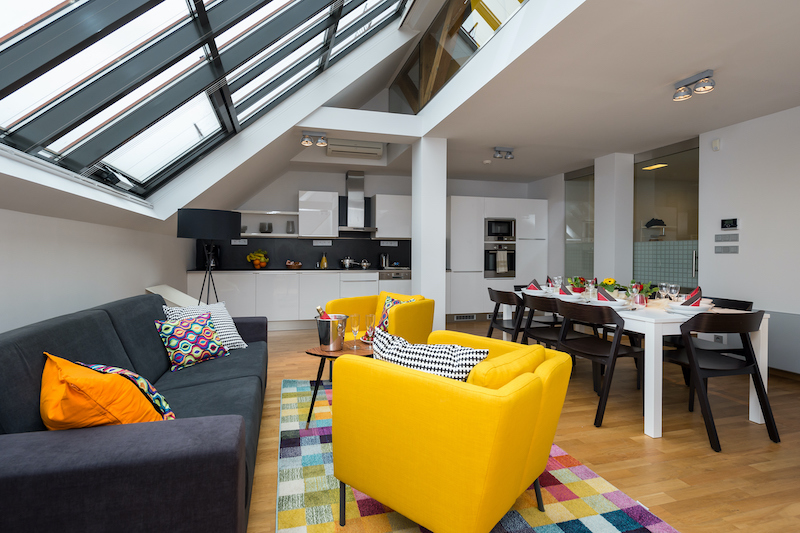 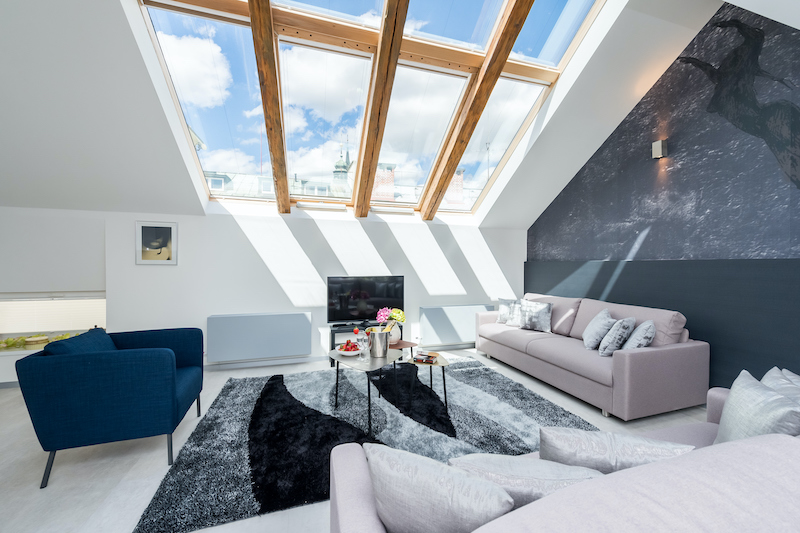 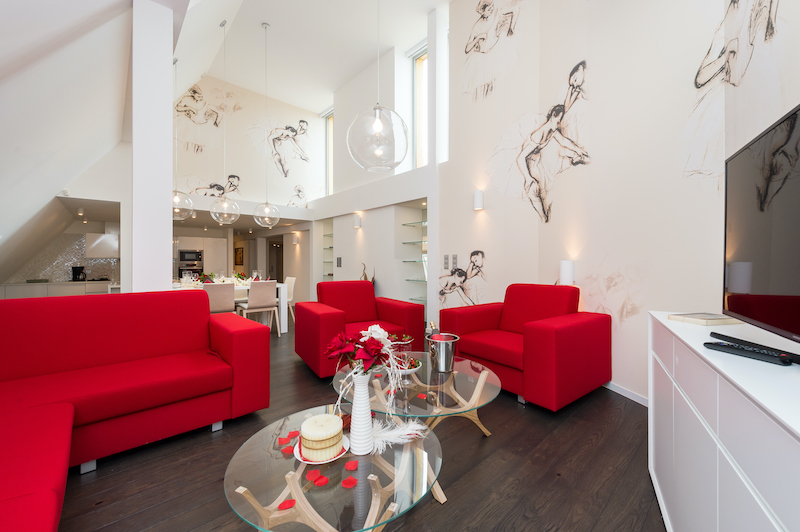 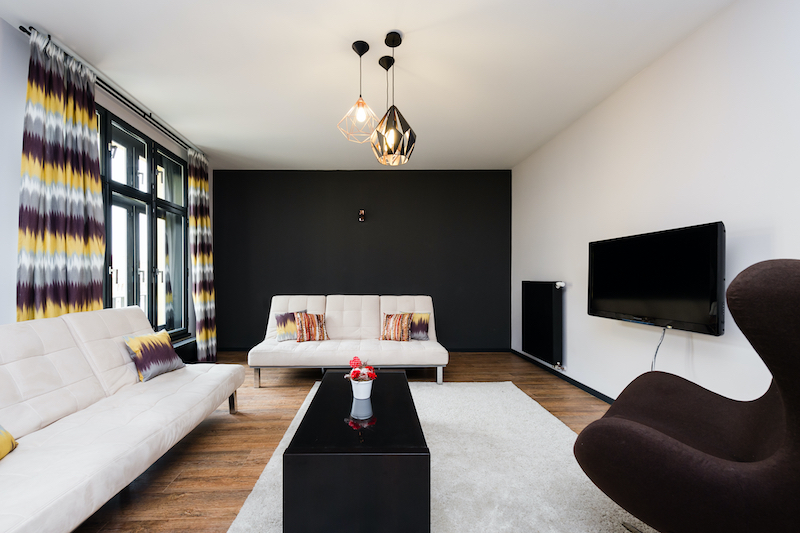 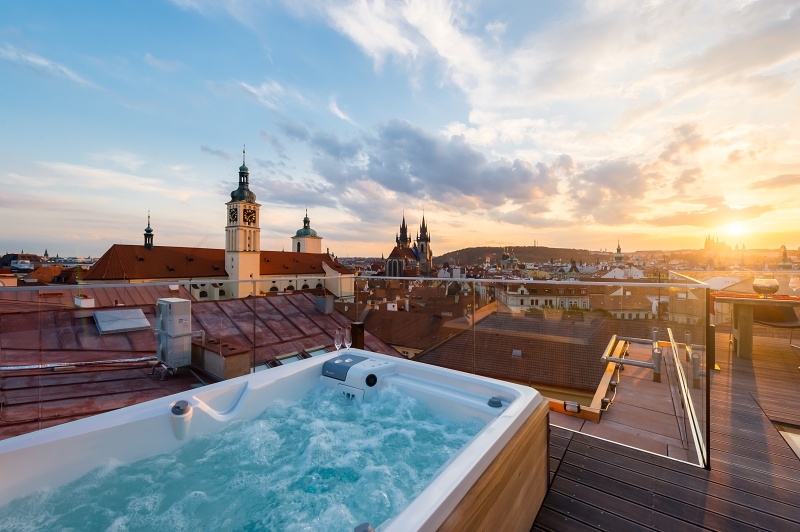 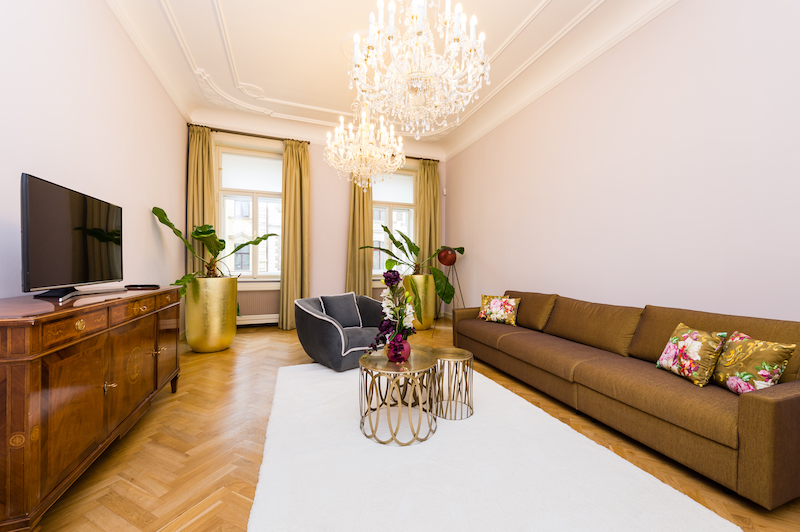 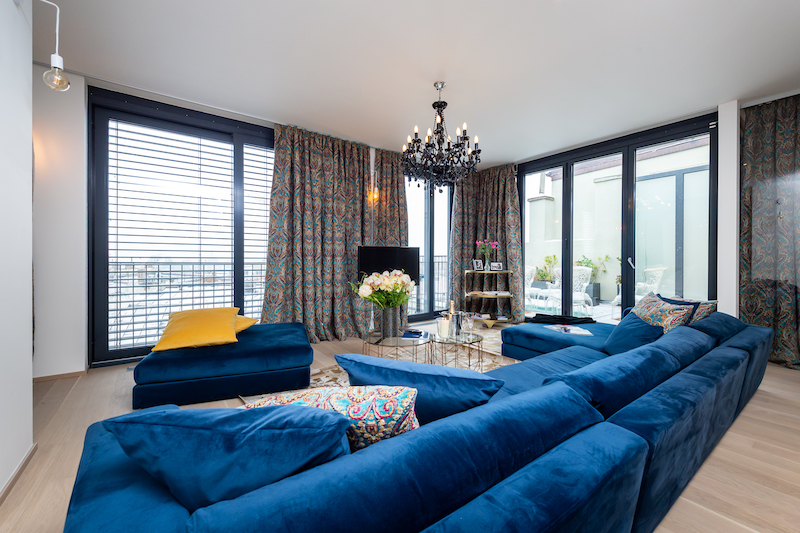 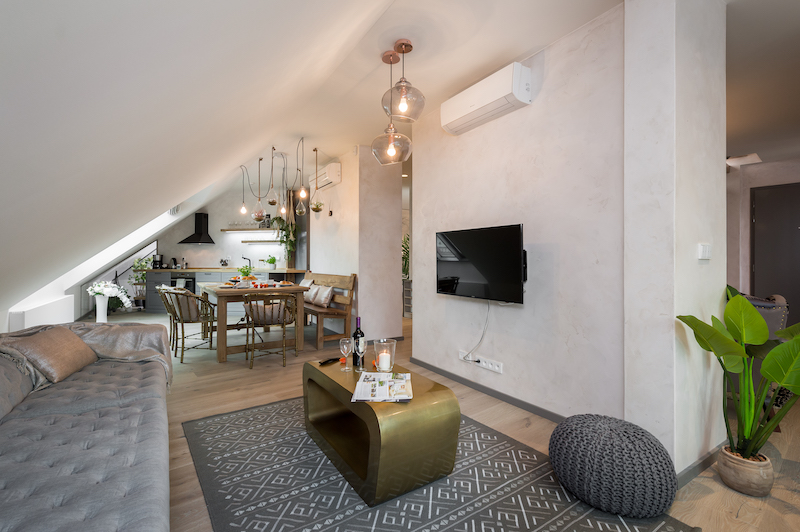 Prague is the 'Jewel in the Crown' of Central Europe and tourism has played an important role in its economic development in recent years. Prague is the capital of the Czech Republic (Czechia), a country located at the heart of Central Europe, bordered by Austria, Germany, Poland and Slovakia.

In the Middle Ages, Prague became the capital of Charles IV's Bohemian Kingdom, with Prague Castle the seat of the empire. And the city has played a pivotal role in the region ever since. Prague's epic history has produced a city full of beauty, of stunning Gothic, Renaissance and Baroque era buildings, and of majestic squares. In modern times, the statist communist era of the mid-20th century has given way to dynamic capitalism. Tourism has helped drive the city's regeneration, transforming grey run-down buildings into bright elegant restaurants, vibrant bars and swish hotels. Prague Tourism Fact: In 1992 the historical centre of Prague, all 866 hectares, was listed in the UNESCO World Cultural and Natural Heritage Register.

Czech is a consonant-rich Slavic language. It is considered to be one of the most difficult European languages to learn by speakers of Latin and Germanic based languages. Native English speakers can find certain sounds very hard to pronounce. The requirements of tourism and globalisation ensure that many Czechs in Prague speak English, particularly the younger generation.The population of Prague is 1.26 million. The population of the Czech Republic is 10.5 million. Czechs belong to the West Slavic group of peoples, along with Poles, Slovaks and Lusatians. Romanies (or Gypsies) form the most conspicuous minority in the country, and are thought to descend from Indian migrants in the 15th century. People from other Central and Eastern European countries, including former Soviet Union states such as Ukraine, have migrated to Prague in recent years to work in tourism and construction.

Prague Castle is a castle complex in Prague, Czech Republic, built in the 9th century. It is the official office of the President of the Czech Republic. The castle was a seat of power for kings of Bohemia, Holy Roman emperors, and presidents of Czechoslovakia.

Charles Bridge is a historic bridge that crosses the Vltava river in Prague, Czech Republic. Its construction started in 1357 under the auspices of King Charles IV, and finished in the beginning of the 15th century.

Palladium is a shopping mall located in the centre of Prague in the Czech Republic. It opened in 2007. The mall contains 170 shops and 30 restaurants, with a retail area of 39,000 square metres. There is also designated office space in the building totalling 19,500 square metres.

The Prague Astronomical Clock, or Prague Orloj, is a medieval astronomical clock located in Prague, the capital of the Czech Republic. The clock was first installed in 1410, making it the third-oldest astronomical clock in the world and the oldest clock still operating. The oldest part of the Orloj, the mechanical clock and astronomical dial, dates from 1410 when it was made by clockmaker Mikuláš of Kadaň and Jan Šindel, then later a professor of mathematics and astronomy at Charles University.

This is an historic square in the Old Town quarter of Prague, the capital of the Czech Republic. It is located between Wenceslas Square and Charles Bridge. The square features buildings belonging to various architectural styles, including the Gothic Church of Our Lady before Týn, which has been the main church of this part of the city since the 14th century. Its characteristic towers are 80 m high. The Baroque St. Nicholas Church is another church located in the square.

Prague has events for all tastes, at all times; once you've explored what's available, you may find it difficult to stay home.

An annual festival of opera, ballet, and classical music which began under communism in 1972. Venues include Prague's National Theater, castle and more. www.praguewinterfestival.com

The Czech Mardi Gras festival, which translates as goodbye to meat, combines Czech and international cultures. Outdoor and indoor celebrations abound, especially in Prague 3´s Žižkov, and culminate with a parade and music on Fat Tuesday.

Prague's largest film festival is FebioFest, which usually takes place late March. Current films from around the globe are showcased, along with some in-depth retrospectives on renowned films and filmmakers. The festival takes place at Village Cinemas Anděl. www.febiofest.cz

April 30th is Pálení čarodějnic, an outdoor witch-burning event celebrated in various parts of Prague and the Czech Republic. Find or build your own fire – although it is illegal to light fires in Prague city limits, the event is unofficially celebrated on Petřín hill.

An international book fair that takes place each May. Some events are limited to industry professionals but others are open to the public. www.bookworld.cz

Large celebration of folk music and Czech culture and heritage that takes place in various towns across the Czech Republic throughout the summer. www.folkcountry.cz

International festival of sacred music held three times per year. The main celebrations take place during the height of the summer in various Prague concert halls. There is also an autumn event in October and a Christmas one. www.choirs.cz

In late August/early September, wine harvesting begins and a number of wine festivals are held throughout the country. Burčák is the sweet tasting young wine which is only partially fermented. One of the largest wine harvesting celebrations in Prague is Vinohradské vinobraní, usually held in late September in Prague 2's Vinohrady district.

Major international music festival held in the National Theater and other venues throughout the season. www.strunypodzimu.cz

Student film fest from the young filmmakers at FAMU, one of Europe's oldest film schools. www.famufest.cz/2006/index.html

Competition festival held over Christmas in Prague celebrating a variety of Christmas music and carols along with Czech Christmas traditions. www.choirs.cz

The Prague airport is located about 15 km/9 miles from the city center. It takes approximately 25 - 30 minutes (40 minutes in heavy traffic) to reach the center by car and about 30 minutes on public transport (bus + subway).

When renting a car, you will, of course, need a valid drivers license, a passport or any valid ID to show, along with a credit card. Debit cards or cash payments aren’t allowed so make sure that you have all the necessary things to rent a car. If you’re coming from a country outside of the EU, you may need to show an International Driver’s Permit. If you are between the ages 21-23, you need to pay an extra fee, likewise, if you are over the age of 60, you might be asked to show a medical certificate. These rules vary per car rental company so it is best to check these things ahead of time.

Prague metro is well spread out and will get you just about anywhere you want in the city. The metro system is not confusing at all and most likely you won’t need to take any other mode of transport at all. There are just 3 metro lines in Prague – A (Green), B (Yellow) and C (red).

The Czech version of Uber is called Liftago and I used it a few times. You just need to put your pick up and drop locations, and the drivers send you the best prices that you can pick. On the other hand, the locals warned me that if I hail a taxi from the street directly, they would overcharge me or scam me. Thankfully, never experienced this.